This is the largest sale of an NFL card in history

It didn't take long for Kansas City Chiefs quarterback Patrick Mahomes to become one of the faces of the NFL. After sitting behind veteran Alex Smith in his rookie season, the Texas Tech product led the Chiefs to the AFC Championship game in his first season as starter in 2018, and then won the Super Bowl the very next year. In 2020, he made it back to the big game before falling to Tom Brady and the Tampa Bay Buccaneers. Still, Mahomes has gone an incredible 43-10 including postseason games since he took over as Kansas City's full-time quarterback. 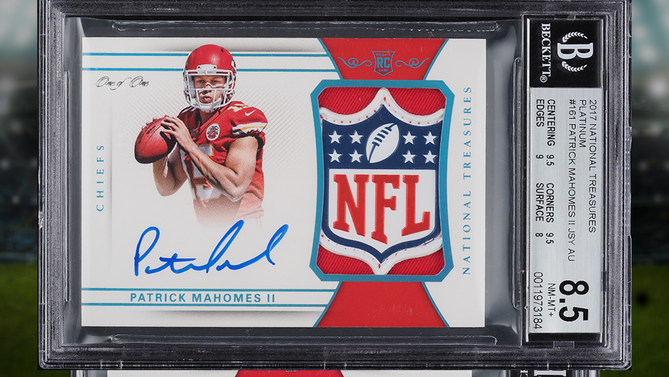 Wouldn't you like to have a Mahomes rookie card? Well, one just sold for a pretty penny. Actually, a record-breaking penny.

On Wednesday, PWCC Marketplace announced that a 2017 National Treasures NFL Shield Mahomes Rookie Auto 1/1 BGS 8.5 card had sold for $4.3 million, making it the largest sale of an NFL card in history. The recipient was a private buyer. The previous record was a 2000 Tom Brady Playoff Contenders Championship Ticket that sold for $3.1 million.

According to PWCC Marketplace, the 2017 National Treasures Platinum Patrick Mahomes 1/1 RPA, bearing the NFL Shield Logo, ranks among the most important cards produced in the modern era. They call it the most desirable of all Mahomes rookie cards, and it was assessed as NM-MT+ 8.5 (near mint condition) by Beckett, paired with a pristine autograph assessment.